Is in from David D in Canada. And it’s a doozie and it’s just his first draft. My comments in bold italic:

“Will have a proper review in a few days when I get a bit more play time.  But after an hour of playing I am very impressed. This game/training program exceeded my expectations.  Because of my son I haven’t been skeet shooting for about 11 months. Before the kids were born I would go skeet shooting twice a week.  I could consistently get 22 and 23 and a perfect game every so often.

I decided to play your game in competition mode before ever enabling any of the training modes or looking at what the game thinks the leads should be. My guess is I should be able to get 18 or so as when I take a lot of time off my first game back. After five or six games, I should be in the low 20’s.

The Comp Mode allows the user to play a round according to the rules of the game. The Teach Mode shows you where your POI was when you miss

Interesting observation -since we do not have an infinite hemisphere to work with in the VR space. We set the scene on the top of a hill – and the far hills make the “earth” look true to scale – not the size of the Truman Show.

After my first game, I got a 19 and it felt perfect. The shots I missed were the sots I miss most times when rusty on station 3,4,5. Over the next few games I got my scores up to the low 20’s. 21 22 etc. the leads felt correct the speed felt correct –  I am impressed. Even the gun sound was correct as so few guns in games sound like real guns.  The echo of the shoot is a small thing but adds so much to the experience.

Stephen sampled a shogun sound – evidently with some reverb/ echo – it sounds real to me too, as does the ambient “outdoor” sounds of birds and wind.

What I want to do is play for about an hour every evening then go skeet shooting for the first time in 11 months and see how I do. Not exactly scientific but will be an interesting test.

I only found one bug so far. It looks like you only get to shoot 24 targets. Your first miss isn’t repeated to get you the 25 total. I have yet to get a perfect game to see if station 7 throws two targets.

David was right – the program was limited to two shots in Comp Mode, which preluded a  free (3rd) shot on a miss !  Bug Fix Numero Uno !

I love I can go to station 3 for example and just shoot doubles as long as I want.  This could help my game a huge amount because if I miss I miss on station 3, 4 and 5.  I also gave trap a try and it felt correct although I shoot trap very rarely.   I got my butt kicked in 5 stand but I have very little experience in 5 stand also.

5 Stand is a real bear, but it’s based on a drone video of a real layout at the National in San Antonio, so it’s bound to improve your game

The only thing I found a bit frustrating was how to hold the controller comfortably. I know you have an add-on for our actual gun that should solve that.

Hence the gun attachment in the Skunk Works

I don’t know if you target audience is people who have shoot the clay sports before or not but a suggestion I suspect you already have in the works are as follows.

2: Gun hold point for all stations.

For me I already know them for the most part but that is a big challenge for new players.

We had all that in Teach Mode and pitched it – since you can learn that from videos – and it really messes up the scene. Plus, we have learned that while the ballistic intercept is the same for everyone, the Hold Point, Look Point and Break Point are zones – and they clutter up the scene wonderfully

I would also love to se a built-in option to adjust the super sampling. Because the game isn’t to demanding on the video card the setting could be quite a bit higher than most vr games. I play most games with ss of 1.5 but 2.0 should make the game look much more crisp. If it were built into the ui that would be a huge help.

I will send you my fill review next Monday or so after I get out and shoot a non vr skeet game.  But an amazing start.” 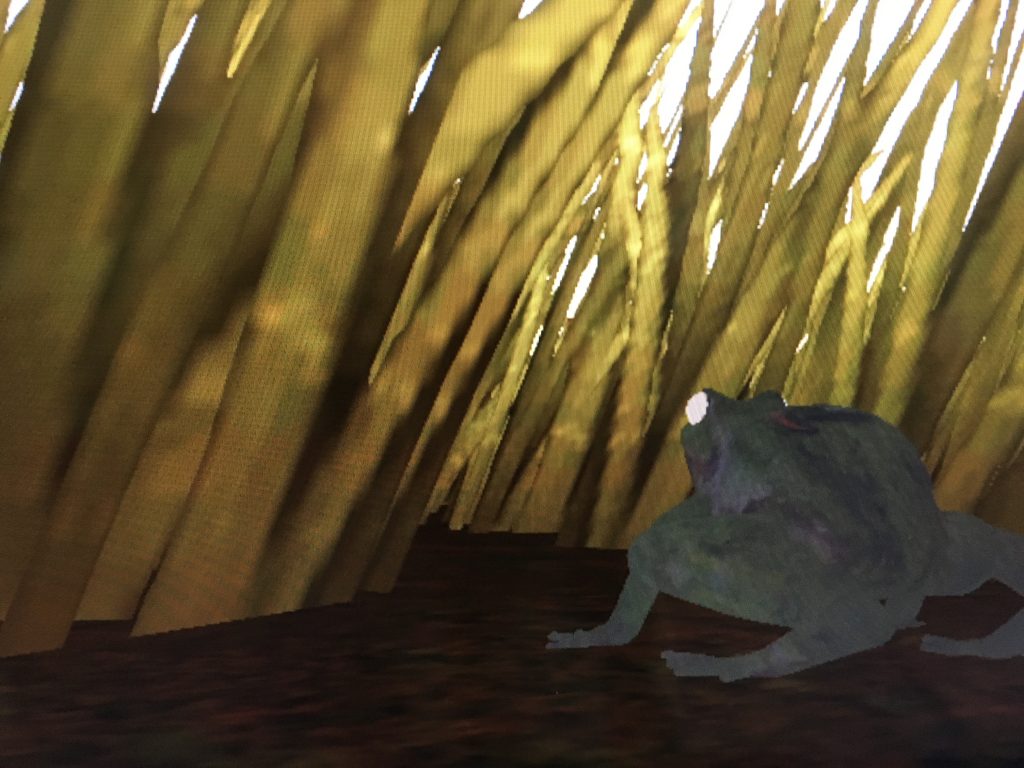 This is just one small patch of the ground in CLAZER